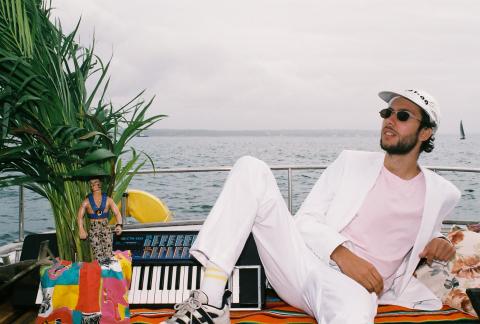 First EP released in June 2018, Miel de Montagne simply appears in the French musical landscape on electronic productions tinged with pop singing about simple life; the one he leads in the countryside with his parents.

With him, every moment of life can become a song. The sadness of watching the dog of his childhood grow old becomes a slow song sung with a smile on his face ("Slow Pour Mon Chien"). The desire for freedom turns into a summer hit with a naturist option ("Pourquoi Pas"). A sincere admission of not always understanding the meaning of life in a disarming feature of sincerity with his mother ("Tu n'y connais rien"). And the joy of getting your licence when you live in the country becomes a hymn to all the candidates for the precious sesame ("Permis B Bébé"), the first single release from his album.

Between an endearing young man and a lively bundle of good ideas, he stands at the crossroads between the serious pop of Flavien Berger or Muddy Monk and the musical eccentricities of Jacques or Salut C'est Cool that he rubs shoulders with on his label Pain Surprises.

On his debut album, Miel de Montagne delves deeper into a pressure-free deciphering of his existence: that of a young man of 24, sometimes lost, with the hope of a ray of sunshine in his voice.

Universal emotions sung in disarmingly sincere lyrics, the result is not simple but honest music. And this is what is most difficult to express for this new generation. These truths full of the desire to live are to be discovered in his first eponymous album.

A concert not to be missed, he will know how to give emotion to each generation of the public.